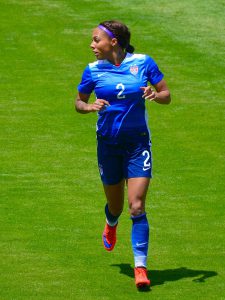 Happy Friday everyone, welcome back to Famous Friday. Today we will be taking a glimpse into the life of Sydney Rae Leroux Dwyer. Sydney Leroux is a proud Multiracial professional women’s soccer player. She is a 2015 FIFA 2015 World Cup winner and Olympic Gold medalist. She plays the forward position on the Orlando Pride US soccer team within the National Women’s Soccer League.

Originally born in Canada on May 7, 1990, to her white Canadian mother, Sandi, and her black American father, Ray, she pursued her love of soccer from a very early age. She played 3 seasons of Club soccer during her freshman and sophomore years of high school and was the leading scorer on her team. She knew from a very early age that she wanted to be a part of the US women’s national soccer team. To pursue this goal, she moved to Scottsdale, Arizona, at the age of 15, and lived with multiple host families. This was a challenge for her since she was out of her comfort zone, and away from her family and friends. However, she quickly adjusted to her new environment and continued to work toward her goal. In college, she went on to play soccer for UCLA and quickly became a rising star, becoming the sixth-highest scorer on her team. Leroux also started in 18 of the 19 games she played.

Leroux was the number one pick by the Atlanta Beat in the 2012 WPS draft. In 2013, she went on to play for the Boston Breakers. At the end of that year, it was announced that she had been traded to the Seattle Reign FC for the 2014 season. Later on, in 2015, she played for the Western New York Flash. In 2016 and 2017 she played for FC Kansas City and since 2018, she has played for Orlando Pride. Sydney continues to embrace her Multiracial background and aspires to be an inspiration for Multiracial kids and teens to pursue their dreams and goals.