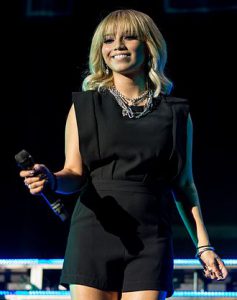 Kirstin Maldonado was five years old when she showed that she wanted to be a singer. When Kirstin was eight years old, she sang at her mother’s wedding reception, convincing her mother to enroll her into singing lessons. Kirstin also got into theater and starred in several local shows, through the theater Kirstin met Mitch Grassi, a future Pentatonix member.

Kirstin Maldonado Attended Holy Rosary Catholic School, and Later Martin high School. At Martin High School she met Scott Hoying with whom she and Grassi would later form Pentatonix. The three of them Created an acapella group and started getting attention around their school for their covers of popular songs. Maldonado graduated from Martin High School in 2010, and attended the University of Oklahoma, where she studied musical theatre on a full ride scholarship as a national Hispanic Scholar. While in college she joined Kappa Kappa Gamma. She left before completing her degree to form Pentatonix.

Scott Hoying wanted to put together a group for NBC’s acapella competition the Sing-Off. Maldonado agreed to join the group, which included Mitch Grassi, Avi Kaplan, and Kevin Olusola. The group won the third season of the Sing-Off. This was just the beginning, since then they have released several albums and EPs, such as their newest on, The Lucky Ones.

Kirstin Maldonado has also done some Solo projects and appearances. On May 19, 2017, Maldonado released her first solo single, “Break a little”. Her debut EP debuted at #1 on the iTunes Pop Albums chart.