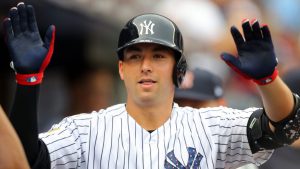 Happy Friday Everyone! This week’s article is about Major League Baseball’s catcher Kyle Higashioka. Kyle Harris Higashioka was born on April 20th, 1990, in Huntington Beach California. Higashioka is of both Japanese and Caucasian descent. Growing up in the ’90s as a California kid, Higashioka notes himself as an avid surfer as well as a guitar player. Attending Edison High School in Huntington Beach, Higashioka quickly grew to fame as an elite baseball player. With his exceptional athletic ability alongside solid grades, Higashioka committed to the University of California, Berkeley before graduating High School. While his original plan was to attend college, his life trajectory changed when he was drafted into the MLB in 2008.

Kyle Higashioka was drafted in the seventh round of the 2008 Major League Baseball draft as a catcher by the New York Yankees. After working his way through rookie ball and other minor league seasons, Higashioka’s first single-A season came in 2012 as a member of the Tampa Yankees. That season Kyle struggled offensively, posting a measly .170 batting average. Unfortunately, Higashioka would barely play the next two years due to an elbow injury resulting in Tommy John surgery as well as a broken thumb. Kyle Higashioka came back stronger than ever, working his way up to Double-A for the Trenton Thunder, where he earned Player of The Week. Midseason, Higashioka would again be moved up, now playing Triple-A for the Scranton RailRaiders. In the 2016 season, Higashioka proved himself to be a defensive stud and improved his offensive numbers resulting in an impressive .276 batting average with 21 home runs.

On April 10, 2017, Kyle Higashioka was called up to the major leagues to help replace injured starting catcher Gary Sanchez. After a rough start going 0 for 22 in his major league career and being sent back to Triple-A twice, Higashioka caught his first hit on July 1, 2018, against David Price, which also happened to be his first major league home run. On July 3 and July 4, Higashioka would homer again, making him the ninth player in Yankees history to have his first three hits be home runs. Higashioka is also noted as the 24th Yankee to have a three-run homerun game, which he earned in September of 2020. His performance at the plate gave him the nickname Kyle “Only Hits Homers” Higashioka. Most recently, on May 19, 2021, Kyle became the first Yankees catcher to catch a no-hitter since 1999. Another interesting fact about Kyle Higashioka is that he speaks multiple languages in order to converse with the Yankees pitching staff. Using English, Spanish, and Japanese, Higashioka constantly works to find better ways to communicate with his throwing partners.