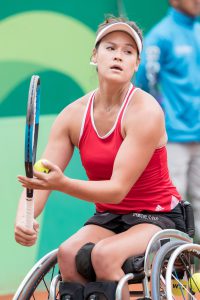 In celebration of Asian American and Pacific Islander Heritage Month and the start of the highly anticipated Tokyo Summer Olympic Games later this month, we feature the ever inspiring Dana Mathewson.

Dana Mathewson is a biracial Chinese and Caucasian wheelchair tennis player for Team USA. Dana was born in San Diego, California, in 1990, to Dr. Arlene and Dr. Jim Mathewson. The Mathewsons had Dana involved in sports from her youth. When she was 10 years old Dana unexpectedly became paralyzed from the waist down due to Tranverse Myelitis. This autoimmune disease caused her immune system to attack the lower extremities of her back which included her spinal cord.

With the encouragement of her parents, Dana began competing in adapted sports. In 2006, Dana competed in her first USTA National Wheelchair Championships. By 2008, she was ranked in the top five of juniors competing. Her success as a junior earned her a spot on the University of Arizona’s wheelchair tennis team. During her time there, Dana became a competitor on the international circuit by competing as a World Team Cup member. She has since played in five World Team Cup tournaments. She has played in both Wimbledon and several US Opens. In addition to these great achievements, Dana won a gold medal playing doubles tennis at the Parapan American Games in 2019.

Currently, Dana is using her platform as a member of Team USA to address issues of racism directed at Asian Americans. At the U.S. Olympic and Paralympic Committee media summit, she along with two other Team USA members detailed incidences of discrimination and racism that they have endured in recent months. Dana is committed to raising awareness for all to be treated kindly and respectfully no matter their ethnicity.