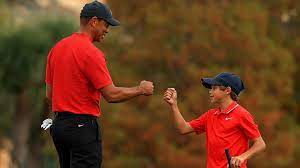 Our Famous Friday person is perhaps the youngest one we have had thus far. He is 12 years old. Charlie Axel Woods, son of golfing great Tiger Woods. Charlie was born on February 8, 2009 to Tiger Woods and Elin Nordegren.  Tiger is multiracial and Elin is White. They were married at the time but have since divorced. Charlie has one sister, Sam Alexis Woods.

Charlie Woods has all the golfing mannerisms of his famous father from taking off his glove to putt, carrying a yardage book in his back left pocket, marking his ball on the green, and lining up shots.

Earlier this year, Charlie became a national phenomenon while competing alongside his dad at the PNC Championship, a father/son scramble at the Ritz-Carlton Golf Club in Orlando, Florida. The Woodses finished with a 62 in the both rounds of the 36-hole event, placing seventh overall at -20, but it sure felt like no one was having more fun than them during the weekend. Charlie even wore a Nike golf shirt just like his famous dad.

Tiger was on TV at age 2 and had been featured in numerous features and news programs before he was a teenager. He had developed a reputation as an excellent young golfer well before he got to high school.

But as much as Tiger has credited his late father, Earl, with guiding him to this point, it was clear Tiger was taking a different approach with Charlie. The golf has mostly been behind closed gates. The discussions about Charlie’s game and his feelings about it are subdued. There has been no hype, no expectations.

And who knows what will come of it. To make any predictions would be ridiculous. But it’s clear, at this point, Charlie has a love for the game and some incredible skills to go along with it.