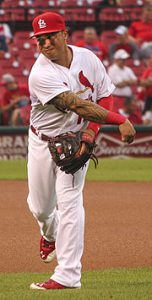 Happy Friday Everyone! This week’s article is about Major League Baseball’s second baseman Kolten Wong. Born in Hilo, Hawaii on October 10th, 1990, Kolten Kaha Wong is of both Hawaiian and Chinese descent. Kolten’s father, Kolen, was also a very successful baseball player. After graduating High School, Kolen played baseball at the Division I level for the University of Southern California. Succeeding at the college level, Kolen also spent two years playing single-A professional baseball for the Reno Silver Sox. After moving back to Hawaii, Kolen decided to dedicate his life to training his sons to play baseball. Living in Hawaii, Kolten Wong’s workouts were often times unorthodox. In an interview, Kolten said that in order to train for hitting, he would spend a few hours every day cutting down trees with an ax. After becoming one of the best performing players in Hawaii, Wong joined the Pacific Southwest baseball team to compete in the Little League World Series in 2007. After dueling it out with some of the best baseball prospects in the nation, Wong’s team took home the championship trophy.

In high school, Kolten Wong played both football and baseball. Wong became one of the best MLB prospects in the country after his standout senior season, being named Hawaii Baseball Player of the Year. While Wong’s success led him to be drafted in the 16th Round of the 2008 MLB draft, he declined the Minnesota Twins offer, deciding to continue his academic and athletic pursuits at the University of Hawaii. During his time in college, Wong was named first-team-all-conference three times and a Baseball America All-America in his Junior year.

Kolten Wong was drafted into the MLB in the first round of the 2011 MLB draft, proving that his decision to decline the Twins offer was a good one. Wong spent two years in the Minor Leagues refining his abilities and preparing for his career as a St. Louis Cardinal. After being called up, Wong established himself early, earning National League Rookie of the Month in May 2014. Throughout the next six years in the Cardinals organization, Wong grew into one of the best middle infielders in all of professional baseball. As proof of his success, Wong won back-to-back Gold Glove Awards, naming him the best defensive second baseball in the National League. This past offseason, Wong signed a two-year, $18 million contract with the Milwaukee Brewers.

In addition to his athletic achievements, Wong has also been involved with various philanthropic organizations. After his home state of Hawaii suffered a catastrophic volcano eruption, Wong fundraised over $60,000 to help those affected by the disaster. Also, Wong has become involved with former teammate Jason Motte’s charity, Strike Out Cancer. Wong expressed his appreciation for the program, partially due to seeing his mother pass away from the disease.