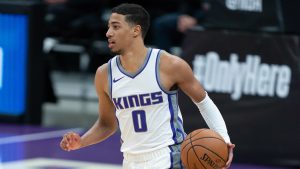 Tyrese Haliburton is a point guard for the Sacramento Kings, who selected him with the 3rd pick in the 2020 NBA draft. Haliburton was born February 29, 2000 in Oshkosh, Wisconsin to a Black Father and a white mother.

In his senior year of high school, Tyrese Haliburton led his school to its first Wisconsin state title, averaging 22.9 points, 6.2 assists, 5.1 rebounds, 3.5 steals and 1.7 blocks per game. He became a three-star recruit and committed to play college basketball at Iowa State.

At Iowa State, Haliburton averaged 10.1 points, 4.7 assists, 4.4 rebounds, and 1.9 steals per game over the 57 games he played. He also set a school record with 17 assists in one game against Southern University in Baton Rouge. During his sophomore season Haliburton fractured his left wrist in a game against Kansas State and was ruled out for the season. This proved to be his last college game as he declared for the 2020 NBA following that season.

Going into the draft, it was almost undeniable that Tyrese Haliburton would be a top-15 pick. Many even argued that he had the talent to be a top-3 pick, and he has definitely proven them right, as he has played great basketball so far this season. He is currently averaging 12.4 points (3rd among rookies), 5.2 assists (2nd among rookies), and 1.2 steals per game (2nd among rookies). He is also currently 2nd among rookies in 3-point percentage and efficiency rating. The Kings organization has described Tyrese as “one of the steadiest playmakers in the game, and nba.com says he has a “veteran-like-beyond-his-years” style of play and a “knack for hitting big shots”. No matter who you ask, Tyrese Haliburton is emerging as one of the best players in this rookie class, and we can definitely expect to hear more from him soon.

Today, he’s the reigning NBA Rookie of the Month, and he’s looking to keep proving haters wrong and fans right, saying “I keep little notes all the time about what people say… I definitely got some stuff bookmarked on my phone of some pretty terrible quotes, and they’ll hear from me shortly”.