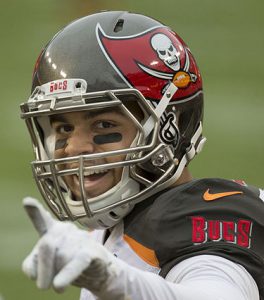 Happy Friday Everyone! This Friday’s post is on recent Super Bowl Champion Mike Evans. Michael Lynn Evans III was born on August 21st, 1991 in Galveston, Texas, and is of African and Caucasian descent. Evans attended Ball High School in Galveston as a three-sport athlete. Throughout the majority of his high school career, Evans focused on basketball and track. During his senior basketball season, he averaged around 18 points, eight rebounds, and five assists per game. On the track team, Evans competed in the triple jump and long jump events as well as the 4×100 and 4×200 meter relays. Evans didn’t play football until his senior year of high school. Even though he had little experienced playing wide receiver, Evans earned second-team District 24-4A honors, catching 25 receptions for over 600 yards and seven touchdowns.

After graduating from Ball High School, Evans decided to continue his academic and athletic career at Texas A&M University. After redshirting as a Freshman, Evans had an immediate impact on the Aggies football team. In 2012, Evans caught 82 passes for over 1,100 yards, earning him All-SEC honors. Evans became a national sensation in his Sophomore year, when Texas A&M took on Alabama, arguably the best football program in the country. In the Aggies’ win, Evans caught seven passes for 279 yards, setting a school record. Due to his exceptional performance, Evans was credited as the AT&T ESPN All-America Player of the Week. Later that season, Evans would break his record with 287 yards against Auburn. Posting consistent numbers throughout the season, Evans was named an AP All-American.

Forgoing his Junior and Senior year of college, Mike Evans declared for the NFL Draft. His success at Texas A&M allowed him to be drafted seventh overall by the Tampa Bay Buccaneers in 2014. Evans put up big numbers in his rookie season, being the first rookie receiver since 1998 to have three consecutive games with over 100 yards as well as being the youngest player in NFL history to amass 200 yards in a game. Since then, Evans has only grown in terms of NFL success. In his six years, Evans has reached the Pro Bowl three times and been named All-Pro once. Additionally, Evans holds numerous records, among those being most seasons of 1,000 yards receiving to begin a career and youngest player to reach 7,000 career receiving yards. Evans’s most recent achievement came last Sunday when he and the Tampa Bay Buccaneers became Super Bowl Champions.

While Evans is mostly known for his incredible ability as an NFL receiver, he is also heavily involved in philanthropic work. So much so that the Tampa Bay Buccaneers have nominated Evans for the Walter Payton Man of the Year Award in each of the last two seasons. Considered the league’s most prestigious honor, the Walter Payton NFL Man of the Year Award recognizes an NFL player for outstanding community service activities off the field, as well as excellence on the field. Congratulations Mike Evans!