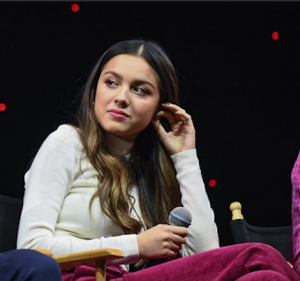 If you’ve been on any social media in the past two weeks, you’ve almost certainly heard about Olivia Rodrigo’s new song, “Drivers License”. Released two weeks ago today, Rodrigo’s official debut single immediately became a hit, debuting at #1 on the Hot 100, and breaking various streaming records. Today, “Drivers License” is the biggest song in the world, and the internet, especially Tiktok, is being flooded with references to, covers, and different perspectives of the hit. But if you haven’t been keeping up with all of the details you might be asking who is Olivia Rodrigo? And how did her first official single become such a hit?

Olivia Rodrigo was born on February 20, 2003 in Temecula, California to a Filipino father, and a white mother. She began taking singing and acting lessons at just six years old, and soon became involved with theater productions at her elementary and middle schools. Her first professional job was on a commercial for Old Navy, and she continued on smaller jobs for a few years.

It was not long, however, before her talent was viewed by a wider audience when she was cast in Disney Channel’s TV show, Bizaardvark, in 2016. She worked on the show until 2019. That same year she was cast in the Disney+ original series High School Musical: The Musical: The Series, and she is currently working on the production of Season 2.

Rodrigo makes it a point to embrace her heritage. Her great-grandfather immigrated to the United States from the Philippines at a young age, and she still has a lot of family there to this day. She says she has not been to the Philippines, but she hopes to be able to one day.

Between filming season 2 of High School Musical: The Musical: The Series, writing and recording new songs, and likely being cast in many new roles to come, I’m sure Rodrigo keeps very busy, but I bet she’ll be able to make that trip to the Philippines soon. Whether its as an actress, a signer, or a songwriter, I’m sure we’ll be hearing from Olivia Rodrigo again.