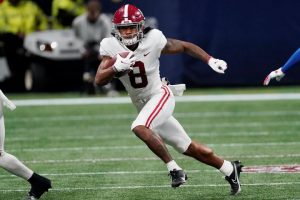 Happy Friday Everyone! This week’s Famous Friday is focused on Football Wide Receiver John Metchie III. John Metchie III was originally born in Taiwan to a Taiwanese mother and Nigerian father. Shortly after his birth, his family moved to Ghana where Metchie III spend most of his young childhood. In a recent interview, Metchie III accounted living in Ghana for his incredible speed because he would constantly have to run away from stray dogs. When he was six, his family moved again, this time to Canada in order to provide a better life for John and his three siblings. Once settling down in Brampton, Ontario, the Metchie kids began playing organized sports. Following in his brother Royce’s footsteps, John developed a love for football and started playing on the Brampton Bulldogs. While his family wasn’t extremely wealthy, football aloud John to develop a rich community and sense of teamwork. Wanting to continue his football career in high school, John and his parents drove to Maryland in order to meet with the Head Coach at the Saint James School in Hagerstown. With a strong recommendation, John left his family at 14 in order to follow his dream. Taking full advantage of his situation, John put in tireless work to instill a great work ethic in himself.  While he quickly became a great player on the field, John faced an incredible setback. After being injured in a game, John was diagnosed with a heart condition that endangered his life. Determined to succeed, John was able to work his way back from his condition and his heart was able to adapt to John’s athletic lifestyle. John said that he is incredibly thankful for his experience because it showed him how to overcome adversity.

After a fantastic high school career, John was able to attend the University of Alabama on a football scholarship. Because Alabama has arguably the best college football program in the country, Metchie III was placed fifth on the depth chart. Using his meticulous work ethic, he was able to master his craft and see the field as a true freshman. While only catching four passes for 23 yards in his Freshman season, Metchie III has stepped up his game in a big way this year. After Alabama receiver Jalen Waddle was sidelined with an ankle injury, Metchie III obtained a much more substantial role on the offense. This year, John Metchie III has caught 55 passes for 916 yards and six touchdowns. His stats and mental ability make him one of the most versatile and elite receivers in college football. Last week, John Metchie III and Alabama defeated the Ohio State Buckeyes 55-24 in the National Championship Game. Congratulations John Metchie III!