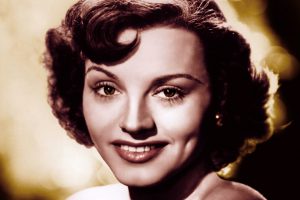 With songs such as Mariah Carey’s “All I Want for Christmas,” Eartha Kitt’s “Santa Baby,” Jason Mraz’s “Winter Wonderland,” and Wham’s “Last Christmas” just to name a few, it’s evident multiracial entertainers like these have given all of us, despite our religious affiliations, reasons to sing and dance at office parties, and school dances. Catherine Laverne Starks or better known professionally as Kay Starr, is another vocalist you might have heard in the month of December.

Kay Starr was born in 1922, in Oklahoma. Her father was an Iroquois Native American and her mother was of mixed Irish and Native American heritage. From her youth, Kay was known for her singing and even had a weekly radio show at the age of 10. This was especially noteworthy as Kay was able to earn approximately $53.00 a week during the Great Depression to support her family. From that time on, Kay consistently performed with bands, orchestras, and record labels. She successfully sang several genres of music that included jazz, pop, and country. Jazz was the genre of music that Kay saw the most success in with hits like “Wheel of Fortune,” “Side by Side,” and “Rock and Roll Waltz.”

Along with these hits, Kay is also known for her jazzy and upbeat recording called “(Everybody’s Waitin’ For) The Man with Bag” that became a fast Christmas holiday favorite and was often on the Billboard’s list of popular songs in the early 1950s. Her husband, Hal Stanley, co-wrote the piece with two others. Kay’s original recording can be heard playing often still today during the holiday season.

As she aged, Kay continued to do television shows, international tours and her last recording with Tony Bennett was in 2001. Kay lived to be 94 years old.