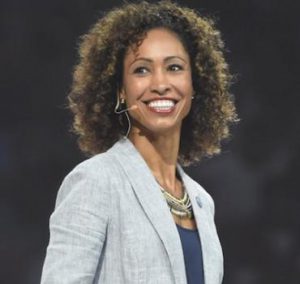 Sage Steele was born on November 28th, 1972 to Gary and Mona Steele. Mona is Irish and Italian, while Gary is Black. Gary Steele was actually the first Black athlete ever to play on West Point’s varsity football team. Sage moved a lot when she was growing up because her father was in the Army. She was born in the Panama Canal Zone and lived in Greece, Belgium, and Colorado Springs before graduating from High School in Carmel, Indiana.

Steele studied sports communication at Indiana University Bloomington and started her career as a sports broadcaster soon after. She worked a number of jobs before making her first appearance on ESPN’s SportsCenter in 2007, and she still works on this SportsCenter today.

I thought the best way for our members to learn about Ms. Steele was to hear her own words. Here’s what she wrote about race and diversity in a 2016 Facebook post:

As a self-proclaimed, proud bi-racial woman — my father is black and my mother is white — the word “diversity” is fascinating. These days, I call it “the D word”. Why? Because everyone likes to say it. At work, at home, at the podium, at colleges and universities. Diversity. EMBRACE DIVERSITY! Fortunately, millions of Americans of all races, religions and cultures do just that. But, how many of us actually mean it? Specifically, how many people of color actually mean it? Or is it simply a socially acceptable, politically correct term that just sounds good, and feels good to say, or to demand? Unfortunately for way too many African-Americans and people of color, I believe it’s the latter. I’ve actually believed this for years and have spoken publicly about it a few times recently, contemplating when the best time would be to fully “go there”. In light of recent events around the country and personally, I feel the time is now.

My mother is a perfect example. Raised by an Irish father and an Italian mother in a small Massachusetts town, she went against her parents’ wishes and married the black man she fell in love with. What she dealt with fresh off of the tumultuous civil rights era was horrific in so many ways — which is one of many reasons why she is the strongest, bravest woman I know. So, instead of rolling your eyes at my black father for “selling out”, shouldn’t you be praising my white mother for following her color-blind heart and not succumbing to the pressures of American society back then? Apparently not. How about now, more than 4 decades later? Instead of giving me those all-knowing looks of disgust and calling me a sell-out when you see pictures of me with my white husband, or see me with my very light-skinned bi-racial children, shouldn’t you be praising that “white boy” from Indiana who followed his color-blind heart and married into a bi-racial culture completely different from his own, to help create a beautiful, color-blind family? Apparently not. Sadly, the list goes on and on, seeping into just about every social and political issue.
Instead of praising or uplifting each other, way too many people of color choose to tear down, mock and spew hatred at other blacks who feel differently, think differently, or make decisions that are different from theirs. That, my friends, is hypocrisy at its best. Or should I say, its hypocrisy at its worst. Here’s the thing:

You don’t get a hall-pass just because you’re a minority. Racism is racism, no matter what color your skin is. So when you call me a sell-out, or a coon, or an Uncle Tom, or any other derogatory term to let me know that you disagree with me, you lose every ounce of credibility with those whom you deem racist at the drop of a hat. Does racism against African-Americans/people of color exist? Of course! It disgusts me more than anyone knows and as far as we have come, there is still such a long way to go. I have personally felt it on too many occasions to count, and I will continue to fight it for me, my family and everyone else out there who truly does believe in diversity. But the fact that so many of us actually have to fight back against other within our own race, is incomprehensible and frankly, it’s pathetic. So go ahead. Keep on keepin-on with that double-standard. That hypocrisy. Just know that every time you do, its sets us back even further, and I refuse to be a part of it. Instead, isn’t it time to look ourselves in the mirror and be accountable for our own actions, and not just point the finger at others? Isn’t it time to truly celebrate how beautifully diverse African-Americans are? Believe it or not, we can disagree and still be civil. Respectful. Kind. Accepting of our differences. Isn’t that what DIVERSITY is all about? EMBRACE DIVERSITY…but mean it. All the time, not just when it’s convenient for you. I pray that we can all begin to have more open-minded, non-judgmental, healthy conversations to ensure that diversity applies to ALL Americans, all of the time.