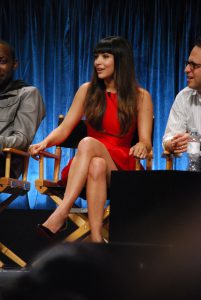 Happy Friday everyone! This week’s Famous Friday is about model, television host, and actress Hannah Simone. Hannah Simone was born in London on August 3, 1980. Simone’s father is Indian while her mother is of German, Italian, and Greek descent. While Simone is mostly known for her work as an actress, she is also very active in philanthropic work.

While Simone was originally born in London, England, she moved around a lot as a child. By the age of 10, she had lived on three separate continents. As a young teen living in Cyprus, she started a career in modeling at 13. After finishing high school in Canada, Simone attended Ryerson University in Toronto. Shortly after she saw her first Television appearance as the host of Space for Living, an HGTV show. Continuing, Simone got a start in the music industry working for MuchMusic as a news presenter and the host of the show The NewMusic. In this position, she had the opportunity to interview many up-and-coming artists and bands in Canada’s music scene. After moving to Los Angeles in 2008, she found a new role in hosting Syfy’s WCG Ultimate Gamer. These smaller roles gave her experience and credibility in the cutthroat Hollywood industry, which helped her land her first major role in New Girl, where she played an Indian model named Cece. Working alongside other major actors such as Jake Johnson and Zoey Deschanel, Simone found a longtime home on the show. Her success in her role led her to a Teen Choice Award for Choice TV, as a Breakout Female Star. While acting on New Girl, Simone also attained roles in What Women Want and Angel in Blue Jeans, where she had the opportunity to work with celebrities such as Kate Upton and Danny Trejo. Recently, Simone announced that she is an executive produce and cast member of the upcoming move Miss India America.

While she is an accomplished actress, Simone has made sure to use her fame to help give back to society. As a woman seeking to help other women, Simone is an avid supporter and donator of the Malala Fund. Additionally, she has also supported AIDS research as a supporter of charities such as the Elizabeth Glaser Pediatric AIDS Foundation and the Magic Johnson Foundation.