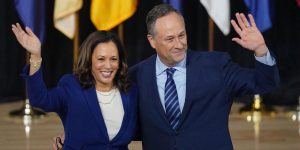 Happy Friday and Thanksgiving everyone!  As you all know, and have seen all over the news and social media, Joe Biden and Kamala Harris won the 2020 election.  Kamala Harris specifically, as a multiracial woman of color – she is of Black (Jamaican) and South Asian (Indian) descent, is bringing so much representation and a voice for minorities to the White House.  Alongside her, and supporting her all the way, is her husband Douglas Emhoff – who is white.

The two met on a blind date in 2013, at this time Harris was California’s attorney general.  According to Emhoff it was “love at first sight” and a year later were married in 2014.  Doug’s children from his previous marriage lovingly welcomed Kamala.  In fact, they call her “Momala”.

Throughout their time as a couple, Doug has supported Kamala, especially through her career.  He has attended debates, campaign events, as well as the Democratic National Convention.  Now, he is even quitting his job to focus on being the first “second gentleman” of the United States.  Through the highs and lows, Emhoff has been there to support Harris.

Together, and individually, this couple is breaking stereotypes and changing social normalities.  First off, Harris and Emhoff will be the first interracial couple at the highest reaches of the executive branch.  Kamala will be the first woman and woman of color, first black person and first South Asian person (and there are more firsts!) to become vice president.  Also, as mentioned before, Emhoff will become the first “second gentleman”, a role that has been held exclusively by women before.  He will also be the first Jewish spouse of a vice president.  This power couple is not only breaking racial and gender stereotypes but are also normalizing having all races in power at the national level.  Amazing!

As someone who is multiracial and has an interracial family, I’m thankful that Harris and Emhoff are setting a new precedent for all future people, of all races, to get a chance to help better this country!