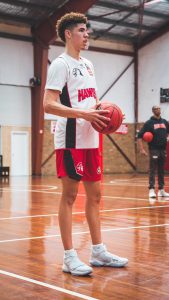 If you watched this year’s NBA draft, you likely saw Lamelo Ball selected as the third pick by the Charlotte Hornets. Ball is the youngest son of his Black father and white mother. If you follow basketball closely it may feel like Lamelo has been in the news for years, and he has. His path to the NBA has been anything but normal, but it has definitely been exciting.

Lamelo Ball and his two older brothers became widely known when they played together at Chino Hills High School in California. This team won a California State Championship and has been in conversation for the best high school basketball team of all time. One of the highlights of Lamelo’s impressive high school career was his 92-point game against Los Osos during his sophomore year. That is more points than most high school teams score as an entire team on a given night!

Ball left high school early to play professionally in Lithuania. After not finding a great fit there, Lamelo joined the Junior Basketball Association (JBA), which was founded by his father as an alternative to college basketball for high schoolers hoping to play in the NBA. The JBA did not last very long, but Lamelo average 40 points, 14 rebounds, and 11 assists per game in this league. After the JBA, Lamelo returned to high school to play for Spire Academy in Ohio, where he excelled as a scorer and a passer. After leaving Spire and being ruled ineligible to play in college due to his professional experience, Lamelo went overseas once again to play professional basketball in Australia, where he stayed until he declared for this year’s NBA draft. On Wednesday, Lamelo and his brother Lonzo (drafted with the second pick in 2017) became the first pair of brothers in NBA history to be selected in the top 5 picks of their draft class.

Whether in California, Lithuania, Ohio, Australia, or elsewhere, Lamelo Ball has proven himself to be worthy of a lottery pick in this year’s NBA draft, and it will not be long until his fans, including me, get to watch him play on the biggest stage yet.