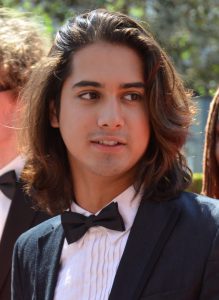 Happy Friday everyone! This week’s Famous Friday is on actor, director, and activist Avan Jogia. Avan Tudor Jogia was born on February 9, 1992, in Vancouver, British Columbia. Jogia’s father is East Indian while his mother is of Caucasian descent. Avan Jogia is known for his acting in hit shows such as ABC’s Twisted and Nickelodeon’s Victorious, and he also the author Mixed Feelings, a book about opposing stereotypical labels enforced by society.

Avan Jogia started acting full-time at the age of 17, and with the promise that he would get a role within the first six months, his parents let him drop out of high school. He then moved from Vancouver to Los Angeles, California. Jogia’s first television role came in 2006, where he had a supporting role on A Girl Like Me: The Gwen Araujo Story. Shortly after, Jogia was cast as Sam in The CW sitcom Aliens in America. Afterward, he worked with Nickelodeon several times on projects like Gym Teacher: The Movie, Spectacular, and most notably, Victorious. On Victorious, Jogia got to work alongside other celebrities such as Victoria Justice and Ariana Grande. Avan Jogia’s first lead role came in late 2012 when he scored the role of Danny Desai on ABC Family’s Twisted. The show tells the story of a young man, who returns home after spending time in juvenile detention and is forced to adapt to the new world. Since Twisted, Jogia has also acted in Tut, Now Apocalypse, and The Outcasts, where he has had the opportunity to work with household names such as Sir Ben Kingsley.

In 2019, Avan Jogia wrote a book titled Mixed Feelings: Poems and Stories. Jogia uses the book to explore and explain his thoughts surrounding controversial topics such as race, religion, and identity. Jogia was later quoted saying, “As soon as you say ‘I’m this type of thing’ it limits the capacity for you to be you. I don’t want to limit myself.” Jogia’s message and creativity in his work hit home for many multiracial people, and his message helps readers understand a different perspective of race as a whole.