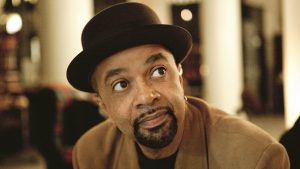 Happy Friday everyone! We hope that you are staying as safe and as healthy as possible during these uncertain times. This week’s focus is on writer and musician James McBride. McBride was born on September 11, 1957, in New York City. McBride’s mother is Caucasian and Jewish while his father was African American. While mainly known for his literary works, it should also be known that McBride is an active saxophonist and composer.

After graduating from Oberlin College in Ohio, McBride decided to pursue a career in writing. His most notable work was his New York Times bestseller The Color of Water. The work is a personal memoir about his life growing up in a large African American family led by his Caucasian and Jewish mother. After being published in 1995, the book spent two years on The New York Times bestseller list and has become an American classic. Later, in 2002, McBride wrote a novel titled Miracle at St. Anna, the story of the 92nd Infantry Division (which was mainly African Americans) in the mid-1940s. The novel’s success led to a film adaptation in 2008, which allowed McBride to work along with big film names such as Spike Lee. His relationship with Lee became strong, and they worked together again in 2012 when James McBride co-wrote and co-produced Red Hook Summer, which tells the story of how spending the summer with his religious grandfather in Red Hook, Brooklyn changes the perspective of Atlanta native Flik Royale. His success in depicting the complexities of discussing race in America earned him the National Humanities Medal in 2015, which was awarded to him by President Barack Obama.

Most recently, James McBride published a novel titled Deacon King Kong. The novel, set in the 1960s, goes through the series of events proceeding the public shooting of a known drug dealer and how it affects the neighborhood around him. The novel has been called one of the most celebrated books of the year and won the National Book Award for 2020. Deacon King Kong was also one of the newest additions to Oprah’s Book Club.