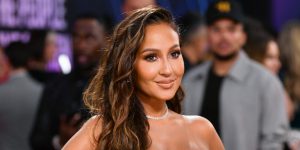 In honor of Hispanic Heritage month we focus this Famous Friday on singer, actress, and television personality Adrienne Bailon.

Adrienne was born on October 24, 1983 to an Ecuadorian father and Puerto Rican mother. She was raised on the Lower East side of Manhattan and attended public schools. Adrienne had aspirations of attending medical school and one day becoming an obstetrician.  However, her future plans changed after a chance meeting with Latin pop star Ricky Martin in 1999. She was chosen by him to be a back up singer on his Livin’ La Vida Loca tour.

Immediately following her performance with Martin, Bailon became a member of the group 3LW with fellow members Naturi Naughton and Kiely Williams. From 1999-2003, 3LW performed with the likes of Destiny’s Child, Nelly, Jessica Simpson to name just a few.  In 2002, due to strife in the group, 3LW disbanded and Adrienne and Naturi rebranded themselves as the Cheetah Girls. With the addition of Raven Symone and Sabrina Bryan, Adrienne’s star status became cemented due to their enormous popularity in both the film and music produced by the Disney corporation.

After much success in the film and music, Adrienne set her sights on becoming a television host of the show The Real. In 2018, she and her fellow co-hosts won the coveted Daytime Emmy Award Most Outstanding Entertaining Talk Show Host. That same year she also launched her own jewelry line and was a finalist on the television show the Masked Singer.

Adrienne has proudly stated that her Christian faith has helped her get through all that she has endured. In 2016, she married Christian performer Israel Houghton and is a stepmother to Israel’s four children.