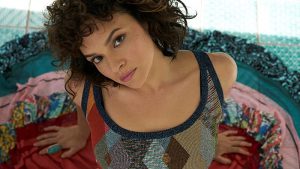 Happy Friday everyone!  Today we will be highlighting Norah Jones!  She was born March 30th, 1979 in New York, New York and is of Indian and Caucasian Anglo-American ethnicity.  Originally, Geetali Norah Jones Shankar, she is a singer-songwriter, who has incorporated jazz, blues, pop and country into her music.

Jones grew up in Dallas, Texas raised by her mother, whose collection of music was an inspiration for her own specific taste.  Growing up, she took voice and piano lessons as well as sang at her church.   In high school, Norah transferred to Booker T.  Washington High School for the Performing and Visual Arts in Dallas.  During high school she received national recognition when she won the Down Beat Student Music Awards for Best Jazz Vocalist in 1996 and 1997, as well as Best Original Composition in 1996.  Jones studied jazz piano and sang with Jazz singers at University of North Texas, during her time there she met Jesse Harris.   In 1999, Norah left Texas for New York City and not too long after, she began a band with Harris.   However, before she became a recording artist, Jones was a lounge singer.

Norah Jones gained her international fame with her debut album Come Away with Me in 2002.  It was a great success, the album selling over 20 million copies worldwide as well as earning six Grammy Awards. Along with that, Jones was named artist of the year. She has gone on to release several other albums including Feels Like Home (2004), which debuted at number one on the Billboard as well as sold one million copies within its first week, Not Too Late (2007), The Fall (2009) and her most recent release Pick Me Up Off the Floor (2020).  Norah Jones is also coming out with a Live Album on April 16th titled ‘Til We Meet Again.  Along with this, Norah Jones has done so much throughout her career!

Today, Norah Jones lives with her husband and two children in New York City.  During the pandemic, she has used her presence on social media to post #StayAtHome performances covering artists including Duke Ellington and her father Ravi Shankar.  Jones also dedicated Duke Ellington’s Fleurette Afrciane (African Flower) to the family of George Floyd and all families who have lost loved ones unjustly by people in power.  Continue to look out for Norah Jones, her music and her voice!