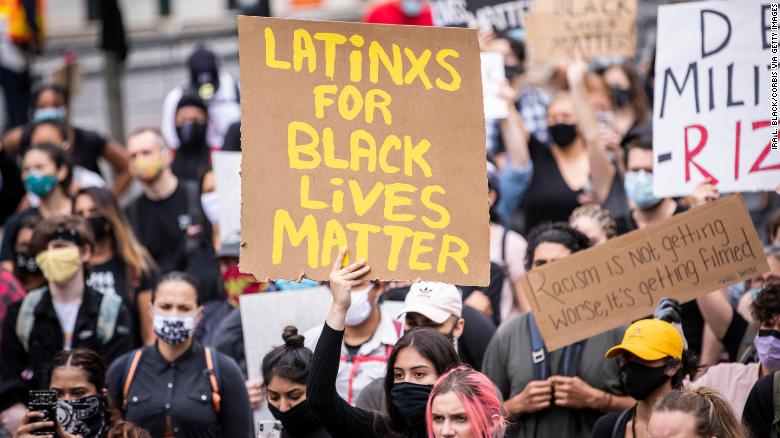 A protester holds a sign that reads, “LATiNXS FOR BLACK LiVES MATTER” in New York on June 2.

(CNN)Depending on which corners of the internet you inhabit, you might have come across the term “Latinx.”

“Latinx” has emerged as an inclusive term to refer to people of Latin American descent, encompassing those who don’t identify as male or female or who don’t want to be identified by their gender. It’s been used by journalists, politicians, corporations, colleges and universities. In 2018, it even made it to the dictionary.

But among the people “Latinx” is intended to describe, few have heard of the term — let alone use it.
Why it matters what pronouns you use to refer to people and what to do if you slip up

In a new survey, researchers found that only about one in four adults in the US who identify as Hispanic or Latino have heard the term “Latinx,” while just 3% say they use it to describe themselves.

The findings, published Tuesday by the Pew Research Center, signal just how complex identity is for people categorized as Hispanic or Latino.

“This reflects the diversity of the nation’s Hispanic population, and the Hispanic population of the US thinks of itself in many different ways,” Mark Lopez, director of global migration and demography research at Pew Research Center, told CNN. “‘Latinx’ is just one of those many dimensions.”

In the US, the terms “Hispanic” and “Latino” are often used to refer to people of Spanish-speaking or Latin American origin.

Those two terms describe a very broad group of people, and don’t always align with the ways that those populations identify themselves.

Which is it, Hispanic or Latino?

Previous Pew research has shown that Hispanic adults most often identify by their country of origin, using terms such as Mexican, Cuban or Salvadoran as opposed to pan-ethnic labels like “Hispanic” or “Latino.”

“Latinx” is another term that has emerged in recent years. It’s largely seen by those who use it as an inclusive term that incorporates those who fall outside the male/female gender binary.

The Pew survey sampled more than 3,000 Hispanic adults in the US in December 2019 on their awareness and use of the term “Latinx.”

Those who used the term tended to be younger, US-born, bilingual or predominately English-speaking and Democratic-leaning, the survey found. They were also more likely to have gone to college.

Searches for the term “Latinx” saw a significant spike in June 2016, according to Google Trends — the same month as the Pulse nightclub shooting in Orlando.

Since then, the term has grown in popularity online, though search interest in “Latino,” “Latina” and “Hispanic” over the last decade remains much higher, the Pew researchers noted. But though online interest in “Latinx” has risen, people of Latin American descent largely haven’t embraced the term.

What does it mean to be Latino in America today?

Those who had heard of “Latinx” were more likely to say the term should be adopted to describe Hispanics and Latinos. But even among that group, a majority preferred the terms “Hispanic” or “Latino.”

“When you ask people whether or not ‘Latinx’ should even be used to describe the Hispanic population or if they had a choice, which they would pick, ‘Latinx’ is oftentimes third behind Hispanic and Latino,” Lopez said.

“So people may be aware of it, but that doesn’t necessarily translate into its use.”

Part of the reason for that could be because “Latinx” just hasn’t been around as long as the other descriptors, Lopez said.

“Hispanic” came into use around the 1970’s and first appeared on the US Census in 1980. But that sparked a conversation over whether that population should be designated as “Latino,” and “Latino” was added to the Census in 2000.
“Latinx,” by contrast, is a relative newcomer.

Why people are split on ‘Latinx’

It’s unclear where and when exactly the term “Latinx” came about, but activists and academics have largely adopted it to be more inclusive of Hispanics and Latinos who don’t fit into the male/female gender binary.
The term replaces the “o” in “Latino” or the “a” in “Latina” with an “x” to make it gender-neutral. But in doing so, its critics say, English speakers are imposing a term on the Hispanic and Latino population that doesn’t make sense for them.

Gilbert Guerra and Gilbert Orbea were early opponents of the term, arguing against it in a widely-cited 2015 op-ed for Swarthmore College’s campus newspaper.

“Perhaps the most ironic failure of the term is that it actually excludes more groups than it includes,” wrote Guerra and Orbea. “By replacing o’s and a’s with x’s, the word “Latinx” is rendered laughably incomprehensible to any Spanish speaker without some fluency in English.”

Cristobal Salinas, a professor at Florida Atlantic University who has researched the use of the term “Latinx,” said the term is sometimes seen as US-centric — and just another way that the US is exerting its influence on Latin America.

Salinas recently conducted a study with 34 Latin American students about their relationship to the term “Latinx.” Many of them said that though they used the term in higher education spaces, they didn’t use it at home with their family members because it didn’t translate across generations.
“The older people, they have been through this before,” Salinas told CNN, referring to the introduction of terms such as “Hispanic” and “Latino.”
Others, like archaeologist Kurly Tlapoyawa, argue that “Latinx” erases people of indigenous and African origin, writing in an essay for Medium that the “Latin” aspect is what’s more problematic.
Tlapoyawa noted that the idea of “Latin America” is rooted in colonialism and was championed by the French. He wrote that he identifies as “Mazewalli,” a term in the Nawatl language meaning “indigenous person.”
“If one is serious about non-gendered terminology, why cling to a European language as the basis of one’s identity? Why not simply adopt an indigenous term?” Tlapoyawa wrote.

What matters is how people self-identify

Some who take issue with the term “Latinx” have proposed “Latiné” or “Latinu” as gender-neutral alternatives that are more consistent with the way Spanish is spoken.

“Regardless of what terminology we use, we have to remember that people create terms to express their own realities, and we should not let terms create our realities,” Salinas said.

Because what’s most important, he said, is how people see themselves.