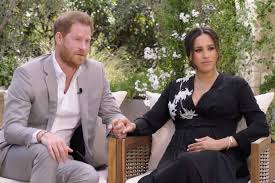 I watched Oprah Winfrey’s much hyped interview with Meghan Markle and Prince Harry. I hope you saw it too. The subject of race was brought up by Oprah many times. When Meghan told Oprah that there had been some discussions with members of the royal family, or “the firm” as Meghan called it, Oprah said, “WHAT?!” The talks centered around baby Archie’s color. Would he be too dark to represent royalty? Why was that even brought up as a royal issue?

It’s a pity that the subject had to ever come up in the first place, let alone the video of feigned shock on Oprah Winfrey’s face. Many years ago, I was contacted by Oprah’s producer. They were doing a show on “mixed-race” children. Oprah refuses to use the terms biracial or multiracial, which are appropriate and educated names for our children. I personally don’t like “Mixed” because its opposite is “Pure.” We certainly don’t want to go there. Anyway, they wanted me or someone from Project RACE to be on the show. I told them it is our policy not to appear on any show that depicts our children as “lesser than” or to portray them all as Black. It took several conversations, but my choice to not appear on the show was accepted. I watched the program when it came out and was so relieved about my choice. One child was so pained at Oprah’s statements about he and his family that he cried through most of the program.

This insensitive behavior has got to stop! Maybe we can start with Oprah Winfrey.