President Trump is moving to revamp federal agencies’ racial sensitivity trainings, casting some of them “divisive” and “un-American,” according to a memo by the White House Office of Management and Budget. 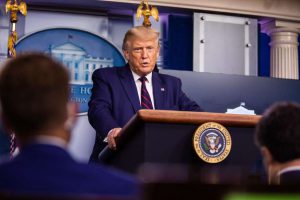 The memo, released on Friday, also tells all federal agencies to identify and if possible cancel contracts that involve teaching that America is an “inherently racist or evil country.”

“The President has directed me to ensure that federal agencies cease and desist from using taxpayer dollars to fund these divisive, un-American propaganda training sessions,“ the memo states.

Vought writes in the memo that “it has come to the President’s attention that Executive Branch agencies have spent millions of taxpayer dollars to date ‘training’ government workers to believe divisive, anti-American propaganda.”

He then refers to a press report that says federal employees “have been required to attend trainings where they are told that ‘virtually all White people contribute to racism’ or where they are required to say that they ‘benefit from racism.’”

It could not immediately be learned what training sessions Vought was referring to in the memo. Recent Fox News segments have heavily criticized “diversity and inclusion” efforts in the federal government started under the Obama administration.

The memo later says that “the President, and his Administration, are fully committed to the fair and equal treatment of all individuals in the United States.”

The memo comes after Trump has put himself at the center of an intense national debates about race, politics tactics, the Civil War, and the Confederate flag. Democrats have long taken aim at Trump’s comments about race, including his false assertion that President Obama was not born in the United States.

And this year, after numerous Black Lives Matter protests occurred around the country following incidents when certain police officers killed or shot Black Americans, Trump has sharply criticized social justice protesters and called for law enforcement to crack down hard.

OMB said it would soon issue more guidance on the crackdown of these training sessions.