Blood can be racially or ethnically specific, so having more blood donors in certain groups can be crucial for saving the lives of patients who share their backgrounds. 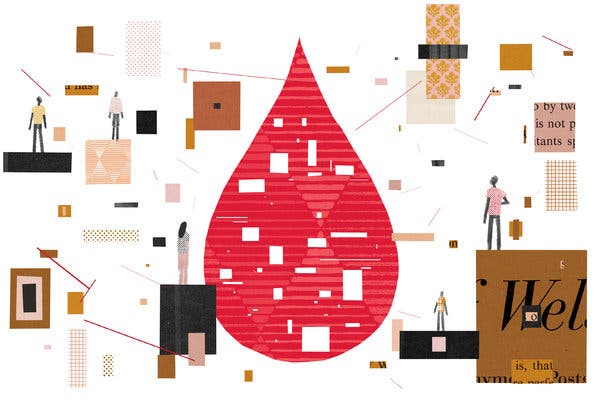 I didn’t know what to say to this, not least because it had been said by the head of donor services at England’s National Health Service Blood and Transplant. The interview was for a book I was writing on blood, a topic I knew a little about by then, but the baldness of his statement still shocked me. Surely we’re all the same under the skin?

I knew the history of race and blood was an ugly one. America’s earliest blood bank, founded in 1937 at Cook County Hospital in Chicago, noted race on donor forms and other blood banks followed suit. During World War II, African-American blood was labeled N for Negro (and some centers refused African-American donors outright) and given only to African-American soldiers. Writing to Eleanor Roosevelt, the chairman of the American Red Cross, Norman H. Davis, admitted that segregating blood was “a matter of tradition and sentiment rather than of science,” but didn’t stop doing it until 1950. Louisiana banned the segregation of blood only in 1972.

But the Red Cross was wrong: While no one is suggesting forced segregation of blood bags, it’s now scientifically established that blood can be racially or ethnically specific.

Most people know about the eight major blood groups: A, B, AB and O, each of which can be positive or negative (the Rh factor). These are determined by genes, and what group you are depends on what combination of proteins and sugars — antigens — are on the outside of your red blood cells. The International Society of Blood Transfusion lists 360 known antigens, but the combinations are infinitely more. Many have no bearing on routine blood transfusion, though all were discovered because they caused a problem with compatibility.

A successful blood transfusion relies on sameness. If incoming blood has an antigen that you lack, your body can react badly to it. In extremely rare cases, the reaction can be fatal; and even if not, it can tax the immune system in people who are already weakened by their condition. Also, you will make an antibody, a sort of immune storm trooper, to better recognize the same antigen next time. Patients who need regular blood transfusions — those who have sickle cell disease, thalassemia or leukemia, for example — may face an ever decreasing pool of suitable blood because they keep creating antibodies.

Wouldn’t it be easier if all our blood was the same? Blame bugs. Much of the variance “has been driven by evolutionary selection by bacteria, malaria and parasites,” says Connie Westhoff, executive scientific director at the National Center for Blood Group Genomics at the New York Blood Center. If malaria finds its way into the bloodstream via a particular antigen, that antigen may change to defend itself, leading to different blood types. Cholera thrives better on intestinal cells derived from O-type stem cells, but O is also more protective against malaria. For many complicated reasons, only 27 percent of Asians have type A, but 40 percent of Caucasians do. Type B is found more commonly in Asia than Europe.

This works not just with blood types. Sickle cell trait is now known to protect against malaria, which is why sickle cell, a painful and debilitating disease caused by malformed blood cells, is found frequently — but not only — in people with African heritage, because malaria thrives in Africa.

This past winter, the case of a little girl named Zainab Mughal in South Florida illustrated all this complexity perfectly. Zainab, who is now 3, has neuroblastoma, an aggressive cancer, and her treatment — chemotherapy and stem cell transplants — means she will need blood.

But she also has rare blood. She belongs to the fewer than 1 percent of the population missing an antigen that the other 99 percent have, making her blood some of the rarest in the world. In her case, she lacks both the antigens Indian B and Big E. Via appeals to the American Rare Donor Program, and then the International Rare Donor Panel in England, Zainab’s local blood banker, One Blood, found five donors with the same extremely rare type.

It was a tall order: the Indian B antigen is known to be lacking in the blood of Iranians, Pakistanis and Indians, so donors had to have both parents from these populations. Two donors live in the United States, two in Britain and one in Australia. Most people, says Susan Forbes of One Blood, “don’t understand the need for a diverse blood supply.”

Publicity about Zainab’s case, though it was extreme in its rarity, helped raise awareness.

Yet it is a difficult message: that our blood is different, red and white cells both. When it comes to finding stem cells for bone marrow transplants, the search has to be equally discriminatory. This time the issue is HLA, the human leukocyte antigens present in white blood cells.

“The reason why ethnicity comes into the picture,” says Dr. Abeer Madbouly, a senior scientist at Be the Match, a program run by the National Marrow Donor Program, the largest stem cell donor registry in the world, “is that HLA encodes the immune system, and the immune system goes through particular conditions based on where you are.” Depending on the threat, each population will develop particular sets of HLA types. In a diverse population like that of the United States, finding a matched donor becomes more challenging for a patient with a mixed ethnic background.

“Let’s say you have someone with African roots and someone from Asian descent coming together, and then they have an offspring of mixed ethnicities,” Dr. Madbouly said. “You have an African HLA and an HLA type common in Asian areas coming together to form a new type of HLA that is not common in either.” Though Be the Match added nearly two million donors to its registry last year, only 30 percent were what Dr. Madbouly calls “diverse.” That’s not enough.

Zainab’s blood is rare, and so is her situation. What concerns blood bankers on a daily basis is a more common condition caused by uncommon blood. Sickle cell disease is predominantly found in African-Americans, and thalassemia among South Asians, and both conditions require precisely matched blood. But there is a shortfall between ethnic minority patients who need blood, and ethnic minority donors. In New York, Caucasians are 35 percent of the population but 58 percent of donors. Twenty-eight percent of New Yorkers are African-American but only eight percent of donors, and that’s after five years of hard work and outreach by the New York Blood Center with its PreciseMatch campaign.

Even so, there was trouble when the Blood Center began in 2009 to offer the option to “self-declare” ethnicity on its donor forms. This was efficient: without a budget to precisely screen every donation, they could home in on antigens known to be specific to certain populations. At first there were problems, when staff members were initially upset by this apparent division of blood by ethnicity. “We didn’t educate the staff,” says Dr. Westhoff, “to know that we weren’t segregating the blood just to be segregating. We were doing it to send all the African-American units to the sickle program children because they were doing much better with blood that came from this same ethnic group.”

Of course disquiet was inevitable, given sensitivity about whether race is skin-deep and whether differences should be highlighted at all, if equality is ever to be reached. But the startling truth about blood is that acknowledging, seeking and celebrating its differences can tip the balance between life and death for people who need it.

Blood bankers are reluctant to talk about why some communities are keener to donate than others, but read some of the “myths about blood donation” that they regularly publish and a picture emerges: Blood donation doesn’t make you put on weight. Nor does it affect your sex drive (though you shouldn’t do vigorous exercise within 24 hours). It is not against Islamic law or tradition. One of the most common reasons people who don’t donate give is that no one has asked them.

Cases like Zainab’s help reach these populations: Many of the 25,000 people who emailed in wanting to help were first-time donors. But as Susan Forbes of One Blood says: “The goal is for them to make it a habit and come back, and help boost the blood supply wherever they live.”

Rose George is a British journalist whose books include “Nine Pints: A Journey Through the Money, Medicine, and Mysteries of Blood.”