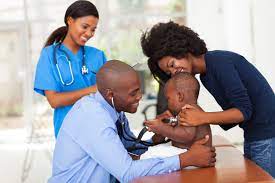 I went to see a new doctor yesterday and while I was waiting in the exam room, I noticed a small statue of a black doctor treating a small black boy. While I thought it was a nice touch, I started to wonder if people really do seek out a physician of the same race or ethnicity. I tend to seek out the best doctor I can find, regardless of their ancestry.

The new doctor came in and he was obviously Asian. We got to talking and he told me that he is Japanese, but was born in South America, so his native language is Spanish! We also chatted a lot about Detroit, both having lived there. He wanted to know all about Project RACE. What an interesting and caring doctor. He had come so highly recommended that choosing him to treat me was no question.

Then this morning, I saw this in The Washington Post: “Being a racial or ethnic minority in this country is hazardous to your health, studies have shown. Poorer outcomes for minorities are documented in conditions from pregnancy and heart disease to cancer and covid-19. In an attempt to eliminate possible bias and receive better care, some people are seeking out doctors of their own race and ethnicity. Same for women who feel a female physician will be more sensitive to their needs and LGBTQ people who will see only gay doctors. Will choosing a doctor who looks like you improve the quality of your health care? Seeing a physician who speaks the same language as you leads to better health outcomes, most studies find, but the research is less conclusive when it comes to race and ethnicity.”

I suppose there are arguments on both sides for doctors who are like you and not like you. Think about it.