The New York Times has recommended some children’s books that would be perfect from Grahndparent’s in this holiday season! Take a look and share your thoughts with us by EMAILING US AT PROJECTRACE@PROJECTRACE.COM

From “A Gift From Abuela.”

My Nana never explained to us why she’d chosen to go by a more culturally neutral shorthand for “grandmother” instead of the customary — and irresistible — Greek word “Yiayia.” She was a proud Greek-American who worked as a receptionist until she was 84, listened to Nana Mouskouri records on the hi-fi in her living room, and rolled dolmades so perfectly uniform they belonged in an encyclopedia of domestic miracles. “Chryso mou,” she used to say out loud when she took my sister’s face in her hands, then my older brother’s, and then mine; we were all her “golden one” (“dear one” is the less literal translation), but the fierceness and unselfishness of my Nana’s love made each of us feel as if we’d been singled out.

The Brooklyn-based illustrator and graphic designer Cecilia Ruiz captures the particular tenderness of grandmothers in A GIFT FROM ABUELA (Candlewick, 29 pp., $15.99; ages 4 to 8), her first book written expressly for young children. Ruiz’s “The Book of Memory Gaps” (2015) and “The Book of Extraordinary Deaths” (2018) are dazzlingly Goreyesque in their cataloging of suggestive memory disorders and evocative deaths from the seventh century B.C. to the present. “A Gift From Abuela,” with its block-printed illustrations in muted colors, is more modest in its storytelling and heartwarming in its message, though Ruiz still manages to capture complex social realities (the economic crisis in Mexico in the early 1990s, the alienation of older adults).

The story itself is simple: Abuela saves her hard-earned pesos to buy a special present for her beloved granddaughter Niña, though when the government devalues the peso and she fails to exchange it, the money becomes worthless. To lift Abuela’s spirits, Niña’s solution is to cut the old bills into pieces for elaborate papel picado banners and use them to decorate the drab apartment, allowing Ruiz to create an art-project-within-a-picture-book story that had my own 2-year-old transfixed. An abuela’s love is valued and returned in new and innovative forms. At the book’s end, Niña and Abuela are spending a Sunday in the park, having pan dulce and watching the people go by: “It was still their favorite thing to do,” Ruiz writes. 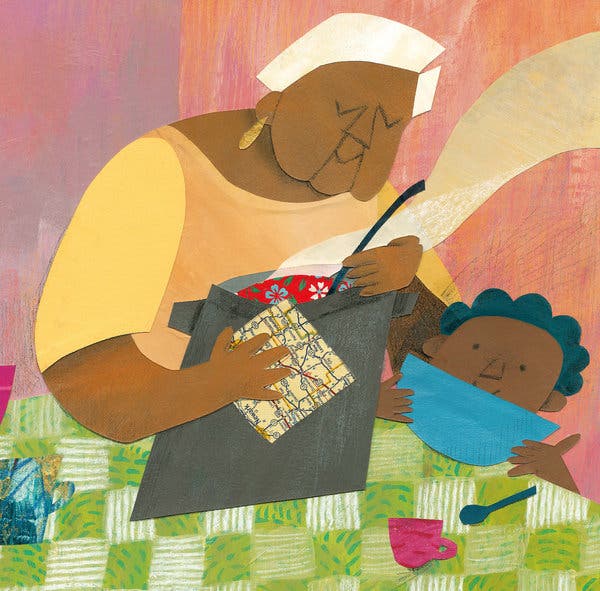 The grandmother figure in Oge Mora’s debut as an author-illustrator, THANK YOU, OMU! (Little, Brown, 31 pp., $18.99; ages 4 to 8), is a life-giving force with a nearly bottomless stew pot. The story opens in a kitchen at “the corner of First Street and Long Street, on the very top floor” (the city is unnamed), where Omu, dressed in a yellow drape and gold drop earrings, is tasting the delicious stew that she plans on eating that night. Mora’s illustrations use collage to give the book’s world a sense of depth and vibrancy — the stew in the pot is represented by an ever-changing calico design — and the stream of cooking odors trailing out the apartment window gives the first hint of the book’s folkloric plot.

An author’s note informs us that in the Nigerian language Igbo, “omu” means “queen,” and that in Mora’s family, the word also meant “Grandma.” As Omu’s cooking pot simmers on the stove, the delicious smell travels, and soon a succession of people are knocking at the door to get a taste: a boy from down the hall; a female police officer; a hot dog vendor; a cabdriver. Omu, thanks to the deliciousness of her stew, becomes a grandmother to the whole community. When her pot finally runs empty and it looks as if Omu won’t have anything to eat that night, the community returns the love by feeding Omu with an impromptu potluck dinner. Mora is especially deft at using pastels and china markers to give the faces of her cutout figures roundness and expression; similarly, the street scenes are filled with cutouts (a lurching taxi, a flying bus, an energetic-looking soccer player) that will have toddlers reaching out to grab them. 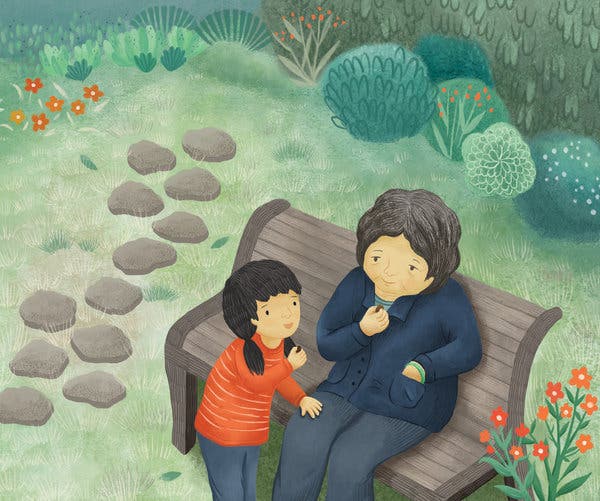 The writer Betty Quan and the artist Carmen Mok strike a more somber note in GRANDMOTHER’S VISIT (Groundwood, 29 pp., $17.99; ages 4 to 8), their collaboration about the persistence of grandmothers — and the sense of absence that follows their loss. Told in the first-person, the book follows an unnamed girl through her days with her Chinese-born grandmother (it’s never stated outright, but the girl’s grandmother is her primary caregiver while her parents are off at work), learning how to get the proportions right when cooking a pot of rice, or listening to her stories about eating red lotus beans on holidays back in her village. Suddenly the girl’s grandmother is no longer at her side after school, and the door to her bedroom is always closed. Her death is handled suggestively, and the book’s color palette darkens as the story takes a beguiling turn in its last pages and veers into the territory of a traditional Chinese ghost story. Small children shouldn’t be frightened, though — the spirit of this grandmother is much too loving and protective for that.

Lest we forget about grandfathers and their unearthly powers, the beloved children’s author Tomie dePaola, best known for the classic witchy grandmother story “Strega Nona” (1975), has created the beautifully spare picture book QUIET (Simon & Schuster, 28 pp., $17.99; ages 4 to 8). This meditation on seeing and stillness teaches mindfulness to children — and the adults who read to them — in a nonpreachy way. Everything about the book is pared-down essentials, from the one-word title to the sparing use of text to the colorfully elemental illustrations. 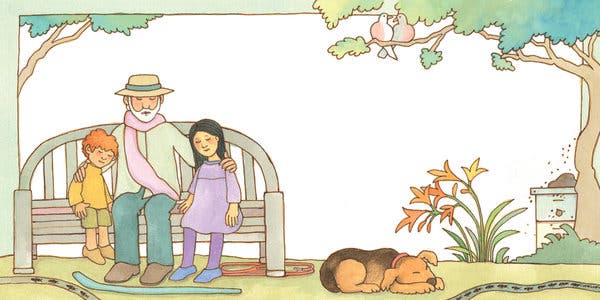 In its slowness and its serenity, “Quiet” is a prime example of the “late style” in dePaola’s trajectory (think Shakespeare’s “The Tempest” or Verdi’s “Falstaff”) and a corrective to the distraction that threatens to engulf us all. Leave it to a grandparent with an uncanny gift of sight to remind us how to stop, look and really see. But quietly.