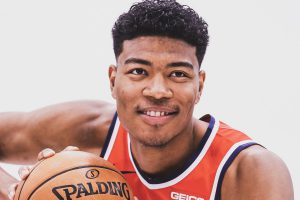 Welcome to another Famous Friday!  As the NBA playoffs recently began it’s only fitting we talk about a great biracial basketball player!  Rui Hachimura was born February 8, 1998 to a Japanese mother and a Beninese father in Toyama Prefecture in Japan.  From a young age sports has been a part of his life.  Rui (塁), which means “base” or “fortress”, was given his name from his Grandfather who loved baseball. As a child, Rui played baseball as a catcher and pitcher.  His brother Allen (阿蓮, Aren) also plays basketball.  Allen is currently playing basketball at Tokai University in Japan.

Throughout his high school and teenage years, Hachimura did many great things with basketball.   For three consecutive years, 2013-2015, he led the Meisei High School team to victory in the All-Japan High School Tournament.  On the 29th of December, 2013 in the game against Fukuoka University Ohori, Hachimura scored 32 points in a 92-78 win.  In April of 2015, Rui was invited to the Jordan Brand Classic.  Here, in the International Game, he recorded five rebounds and nine points.  November 2015 was when Hachimura signed a National Letter of Intent to play college basketball in the U.S. for the Gonzaga Bulldogs.  He was considered by ESPN one of the best international basketball players entering college.

Rui has been open about his challenges he’s faced as a biracial person in Japan.  Part of the reason he wanted to come to the U.S. was because he knew he would be treated differently.  While he was glad to come to the U.S., he would have to face a language barrier, and while that is not necessarily an easy feat, he embraced the challenge.  He would have 5 to 6 hours of daily english study as well as learn through music and TV shows, like The Vampire Diaries.  Within three years, his coach believes his understanding has grown from 10-20% to 90%! During his time in college Hachimura attained great achievements.  During his Junior year he led the Bulldogs to an NCAA record of 9-1.  Also his junior year, He was named the West Coast Conference (WCC) player of the year.  In 2019, Rui made history.  He was drafted 9th overall by the Washington Wizards, which made him the first Japanese player to be picked in the first round of the NBA draft.

Now watch out for the up and coming Rui Hachimura!  He has overcome several challenges but never gave up, and is now representing his family, country and the multiracial community in the NBA!