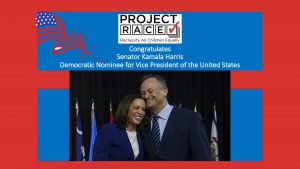 Despite the fact that Project RACE has featured Senator Kamala Harris several times, we can devote this week’s Famous Friday to no one else. Huge congratulations to Senator Harris, who made history at the Democratic National Convention this week as she accepted the nomination for Vice Presidential of the United States. She is the first woman of color, first Black woman, first Asian-American woman, and the first multiracial woman on a major party ticket! In this time of tremendous racial and political division it will be interesting to watch the reaction of our country to her candidacy continue to unfold.