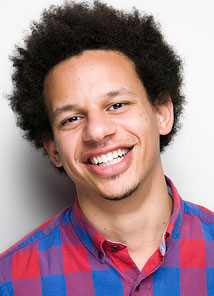 This week’s focus is on actor and comedian Eric Andre. Andre was born on April 4, 1983 in Boca Raton, Florida. His mother is American Ashkenazi Jewish, while his father is of Afro-Haitian decent. Andre embraces his ethnic background and identifies as both Jewish and African-American.

Before becoming a well-known actor and comedian, Andre played bass while attending college at the Berklee College of Music, where he graduated with a Bachelor of Fine Arts degree. After graduating in 2005, Andre soon followed his passion of becoming an actor. He started off slow with a number of small parts in films and television shows such as Popstar: Never Stop Never Stopping, The Big Bang Theory, Zeke and Luther, and Two Broke Girls. His success on-screen gave him the opportunity to create and host The Eric Andre Show, which he has done since 2012. The show is comedic and features practical jokes, humorous sketches, and celebrity interviews.

The shows accomplishments have led Andre to bigger film roles in recent years. Andre has played recurring roles on both the ABC and FXX networks as well as voice-over roles in Netflix’s Disenchantment and the newly redone live action The Lion King. The combination of Eric Andre’s outgoing personality along with his success as an actor showed in his recently released Netflix stand-up special. Andre was more than comfortable onstage and may continue to do stand-up.