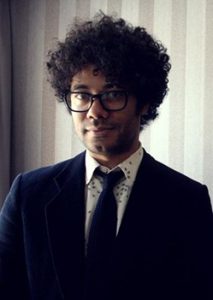 Richard Ayoade was born in Hammersmith, London May 23, 1977. Richard grew up with his father who is Nigerian and his mother who is Norwegian in Suffolk, England. At 15 he started to find an interest in film. Two of his biggest inspirations were Back to the Future and Star Wars. As his interest in film increased, he studied at St Joseph’s College where he eventually became obsessed with a book called The Catcher in the Rye. Richard transitioned from St Josephs to St Catharine’s College in Cambridge in 1995. There he won the Martin Steele Prize for play and production and was the president of the Footlights club. In 1998 he transitioned to University of Cambridge to study law. Richard Ayoade became widely known for his role in The IT Crowd. In 2007 Richard married Lydia Fox, a member of the Fox family. They have 3 children. Richard eventually started to direct music videos and wrote a comedy-drama film Submarine in 2010. In 2012 he co-starred in the science fiction comedy The Watch. He also voiced characters in animated movies like The Boxtrolls in 2014, The Lego Movie 2 in 2019 and Soul in 2020.