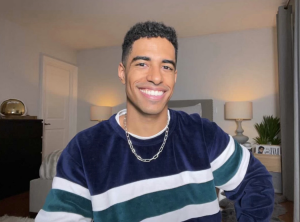 Guys! I got to chat with my favorite TikTok creator today!

Like almost everyone I know, I have spent an unreasonable amount of time on TikTok in the past year. When I should be studying for AP exams, I’m on TikTok watching cooking videos, sports debates, and things I couldn’t describe if I tried, I’ve seen TikToks from more creators than I can count. But if I had to choose one creator as my very favorite, I’d choose Boman Martinez-Reid.

Boman, known on social media as Bomanizer, is a Canadian actor, artist, activist, and influencer who was born on January 10th, 1998 to a Spanish mother and a Jamaican father. From a young age, Boman loved reality TV shows. So much so, that in high school he starred in his own YouTube reality show, Reid it and Weep.

A little over a year ago, Boman began posting on TikTok. He quickly gained a fanatic following. His trademark style, everyday occurrences filmed with all of the drama of a reality show became a huge hit. His gift for relatable humor and his comedic timing are perfect. I believe I have personally laughed out loud at every scene he has posted. He now has more than 1.4 million TikTok followers and well over 100,000 Instagram followers. He uses his platform, not only to make people laugh, but to have an impact on societal issues that are important to him. Boman, who is gay, speaks out on his social media accounts about celebrating all kinds of love, diversity and inclusion.

“It’s OK to be yourself and whatever you identify with.” Boman recently told Stylesrant.com

As I looked for a free use photo of Boman to accompany this article, I decided to take a chance and shoot him a message. I was so encouraged when he got right back to me with the photo you see here and I was actually able to text back and forth with him to ask about his multiracial identity. He told me the following:

“I think growing up, being multicultural was confusing. I didn’t really see myself as different but was definitely treated as such. As I started to learn more about myself and my respective cultures (mom being from Spain and my Jamaican father) I started to understand that my differences from others made me interesting and quite cool – especially with a name like Boman, I was always the ‘unique’ kid in class. I decided to live up to my name, stand firm in who I am and BE Boman. Now I get to be Boman as a career and it’s so incredibly gratifying.”

Let me just say, I’m glad he’s being Boman as a career too. He has high hopes for his acting career going forward. He is currently signed with Creative Artists Agency, which also represents artists like Beyoncé and Will Smith. I have no doubt we’ll be seeing more and more of this incredible talent. And, Boman, now that we’re friends, can I ask you to stop being so funny so I can get some homework done?

Be sure to check him out @Bomanizer!