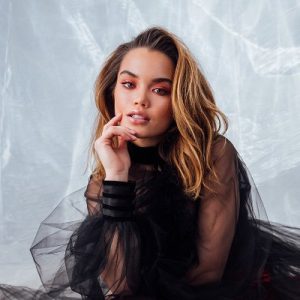 Happy Friday everyone!  We are highlighting the actress Paris Berelc this Famous Friday!  Paris MaryJo Berelc was born on December 29, 1998 in Milwuakee, Wisconsin to a father of French-Canadian descent and a mother of European-Filipino descent.  She also has three younger sisters, Bless, Jolie and Skye.  Paris is an American actress and model.

From a young age, Paris had explored her many talents.  At the age of 4, she expressed her love for dance.  At 5, she began gymnastics and eventually achieved level 10 which is the highest level in the USA Gymnastics Junior Olympic Program.  At the age of 9, Berelc was discovered by Ford Models and was seen in ads from Boston Store, Sears, Khol’s nd K-Mart.  She was even featured on the cover of the 2009 November/December issue for American Girl magazine.  When Paris was 12 year old, she took her first acting class at the Acting Studio Chicago.  By the age of 14, she began her professional acting career.

She has acted in the Disney XD TV series of Lab Rats: Elite Force and Mighting Med.  She has been in several other TV shows and movies including Invisible Sister (Disney) and Tall Girl (Netflix).  From 2018 to 2020, Berelc starred as Alexa Mendoza, from Netflix’s Alexa and Katie (which I recommend watching!)

As Belerc has become famous, she has used her platform to speak out on injustice too. She has spoke out against human trafficking, especially of children, as well as issues for racism following the death of George Floyd.  She has brought awareness and given her followers organizations to donate to.  Belerc has also attended Stand Up To Cancer telecasts.

Not only is Paris Belerc majorly talented, she is also a great role model as she stands up for the marginalized and those in need!  I can’t wait to see what she does next!