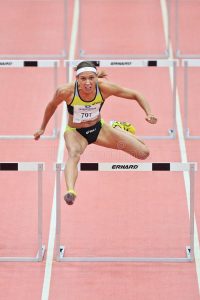 Lori Susan “Lolo” Jones was born on August 5, 1982.  Jones is of Native-American, African-American, Norwegian and French descent.  She is a professional track and field and bobsled athlete.  Lori has also been a special guest on several shows including The Tonight Show with Jay Leno, and was in the remake of the movie series Left Behind as an airport gate attendant.

Jones is a three time Olympian as well as a three time World Champion.  In High School, she set the 100m Hurdles High School of Iowa Record of 13.40 seconds.  While in college at LSU, Lolo won multiple NCAA titles including two outdoor 4x100m (2003 and ‘04), one Indoor 60m Hurdles (‘03) and was runner-up for the Indoor 60m Hurdles and 60m (‘04) and Outdoor 100m Hurdles and 4x100m (‘02).  She also won a gold medal in the mixed team event, for bobsledding in the 2013 World Championships.  She also represented the US at the 2014 winter Olympics on the bobsled team as well.  This made her one of the only athletes to participate in both the summer and winter Olympics

Although Lolo has had much success, it didn’t come easy.  As a child she moved around a lot and was raised by a single mother.  Her father was in the Air Force, but unfortunately later on in state prison.  As a kid she moved frequently and often didn’t know where her next meal would come from. Eventually, her family parted ways.  Throughout high school she lived with families of high school friends with the help of her mentor, Coach Ferguson.  Track was her passion, and the challenges of her childhood motivated her to make a better life for herself through pursuing her dream.

Despite the many hurdles in Jones life, she worked hard and never gave up to achieve a better life.  Lolo is now helping those who have similar situations as she once did.  She created the Lolo Jones Foundation to help Single Mothers; those who live in impoverished communities and families with incarcerated loved ones.