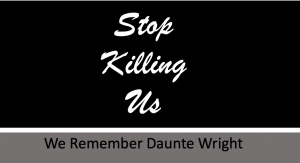 This week’s Famous Friday will not celebrate a famous athlete, musician or politician. This week, I believe it’s appropriate that we take the time to remember and honor the memory of Daunte Wright.

“My brother, just being in his presence uplifted my spirit,” Daunte’s sister Destiny said. “I love my brother so much and this is unbelievable, this is unreal…I feel him here, but in reality, he’s gone and I can’t never see him in person again. Can never feel my brother and give him a hug.”

Daunte Wright, a 20-year-old multiracial man was shot and killed by Minnesota police on April 11th, 2021, just a few miles from the court where the murder trial of the police officer charged with killing George Floyd is currently underway. Daunte was a young man with a two-year-old son, and now he has been killed and is yet another unjustified victim of American Police. Daunte was born in Minneapolis to a white mother and a Black father, who have been seen on the news the past few days pleading for justice that they know will never give them back the son they have tragically lost.

At Project RACE, we condemn white supremacy in all forms, we strongly believe people of color need protection from police brutality, and we mourn the loss of Daunte Wright.

Below are two links. The first is to a go fund me for Wright’s Memorial Fund. The second is an article with more information regarding the event of Wright’s killing, and a list of ways that you can help, if you feel moved to do so.

Mourning for the plight of people of color in our nation,