Identity is complicated, and she shouldn’t have to choose just one. 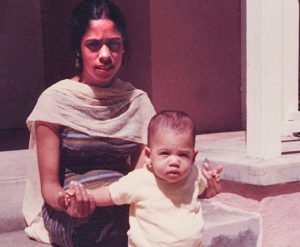 This week, presumptive Democratic presidential nominee Joe Biden announced that Sen. Kamala Harris would be his running mate. News outlets heralded the historic nature of her vice presidential nomination, highlighting that she was the first Black woman and the first Asian American woman to achieve this milestone.

For some people, that last part was news: Wait, Harris is Asian American? It prompted much discussion on social and traditional media about Harris’s background and biracial identity as the daughter of an Indian immigrant mother and a Jamaican immigrant father.
But this shouldn’t have been new information. Harris has had a long career in public life: She was a San Francisco district attorney, the California attorney general, is currently a US senator, and ran for the Democratic nomination for president last year. And yet for years, she has primarily been identified as a Black woman in the public eye, with her South Asian identity rarely mentioned in media coverage until fairly recently. Some of this could be a personal choice, too — a longtime friend of Harris told the Washington Post in 2019 that he had only learned that she was also of South Asian descent after knowing her for 15 years.

While some South Asian voters are upset that this part of her identity has long been downplayed, others are excited about the historic nature of her nomination and what it represents for South Asian American women and women of color. Meanwhile, some Black voters are debating whether she is truly “Black enough,” and far-right critics have already begun pushing birther-style arguments, questioning whether Harris is a US citizen and her eligibility for vice president.

Media coverage has long focused on Harris’s Black identity, and discrimination against Black people plays a role in that

When Harris won her Senate seat in 2016, news coverage repeatedly highlighted that she was only the second Black woman elected to the Senate (the first was Carol Moseley Braun, in 1992). But her victory that day also represented another milestone that some of those same news outlets did not mention: She was also the first South Asian American person elected to the Senate.

Karthick Ramakrishnan, a professor of public policy at the University of California Riverside and founder of AAPI Data, suggested that one of the reasons Harris might be more commonly portrayed as Black in the media is because of America’s history of using the “one-drop rule,” a racist practice that dates back to slavery.

“When you had someone who is the son or daughter of a Black person and a white person in the South, they would have been considered a slave and not a free person, and that legacy continued on through Jim Crow. They would not have the same rights as white people if you had even ‘one drop’ of Black blood. So that legacy is still very powerful; it affects not only how white people or American society in general think of Black folks but also how Black folks think of themselves,” Ramakrishnan told Vox.

Black Americans have historically faced much deeper oppression and systemic racism than Indian Americans, and as Slate’s Nitish Pahwa notes, “the Indian experience is nowhere near as central to American politics and to American life and history as is the Black experience.” Black Americans also face much deeper injustices than any other racial or ethnic group in America: They’re more likely to be killed by police, and at the moment they are disproportionately affected by Covid-19 as well as unemployment and the economic crisis.

Growing up Black in America is also a very different experience than growing up Indian in America, as Indians have frequently benefited from “model minority” stereotypes — the false belief that Asian Americans are smarter, harder-working, or more successful than other racial and ethnic groups. It’s a trope that has been used as a “racial wedge” between Asian Americans and Black Americans.

Diana Sanchez, a Rutgers University professor who studies multiracial identity in America, noted that research has shown that “when you have Black ancestry in your background, and this is seen as the lower-status group in society, people will tend to categorize you along those lines.” Sanchez added that Harris’s “South Asian identity might be perceived as more higher status because of the way discrimination works and some of the positive stereotypes that exist for Asian American groups compared to Black American groups. So she is likely to be categorized as a Black candidate.”

Much of society, especially white society, can look at Harris and perceive her as Black, and she will face discrimination as a result of that, regardless of which culture she might choose to identify with — and that has likely played a big role in how she views herself in the world.

In her 2019 autobiography, The Truths We Hold, Harris wrote of how her Indian mother raised her with an appreciation for Indian culture, cooking her daughters Indian food, giving them Indian jewelry, and taking them on trips abroad to visit extended family. But Harris wrote that she was also keenly aware that the world would perceive her and her sister as Black women first and foremost: “My mother understood very well that she was raising two black daughters. She knew that her adopted homeland would see Maya and me as black girls, and she was determined to make sure we would grow into confident, proud black women.”
Harris also made choices that indicated she was leaning more into her Black identity over time: She attended Howard University, one of the country’s most prestigious historically Black colleges, and joined a Black sorority, Alpha Kappa Alpha. Harris speaks fondly of her time at Howard and often emphasizes her time there in responses to critics who question her Black identity.
But that doesn’t mean that her Indian heritage isn’t part of her identity, either. Harris’s late mother, Shyamala Gopalan, has long been a prominent part of her story. Gopalan, a breast cancer researcher who grew up in the Indian state of Tamil Nadu, graduated from college at the age of 19 and immigrated to the Bay Area in 1959 to attend graduate school at the University of California Berkeley. There she met Donald Harris, a fellow graduate student who later became a professor of economics.

The couple married and had two daughters; they divorced when Harris was 7 years old, and Harris and her sister were raised primarily by their mother. Gopalan was active in the civil rights movement in Berkeley in the 1960s and ’70s, marching in protests with her husband and sometimes bringing her daughters. It is the kind of family story that represents an increasingly multicultural, demographically diverse America: two immigrants from different countries who both came to the US to pursue higher education, who then raised two Black and South Asian daughters.

But it seems that for some, Harris’s uniquely American multiracial identity is less the utopian future we’re striving for and more a source of confusion — and sometimes even a justification for racism and suspicion.

Pew Research estimates that 6.9 percent of the adult American population is multiracial, and the Census Bureau predicts that the multiracial population in America will triple by 2060. But though this identity group is rapidly growing, many Americans still don’t know how to talk about multiracial people. Americans want to be able to easily label people by race and put them into one box.

Harris herself told the Washington Post in 2019 that when she entered politics, she felt pressure to define herself: “When I first ran for office that was one of the things that I struggled with, which is that you are forced through that process to define yourself in a way that you fit neatly into the compartment that other people have created,” Harris told the Post. “My point was: I am who I am. I’m good with it. You might need to figure it out, but I’m fine with it,” she said.<

Sanchez says that multiracial people can face what she refers to as double discrimination, where they experience discrimination from both communities they are members of. In Harris’s case, that leads to South Asians saying she’s not South Asian enough and Black people saying she might not be Black enough. “So there’s all these different sources of discrimination that are affecting the development of your multiracial identity and your experience with it, and that can make it hard to navigate,” Sanchez said.

Many South Asian Americans have been excited about Harris’s historic nomination. Nitish Pahwa wrote for Slate that while he was conflicted about Harris’s political record, the moment was “undeniably a landmark moment for the South Asian diaspora. No matter how you spin it, it is progress, a bold assertion of the United States’ multiculturalism.”

But Harris has also faced detractors. Indian media has pondered the question of whether Harris is Indian enough, and she has simultaneously been accused of not being “Black enough.” In 2019, accusations swirled on Twitter that Harris was not an “American Black” because her father was a Jamaican immigrant, rather than the descendant of enslaved people (these rumors later appeared to be the work of a coordinated bot campaign, but it was still retweeted by Donald Trump Jr. and spread briefly into the mainstream). Similar attacks on Harris’s Blackness have already begun anew since her VP nomination, with Newsweek publishing an op-ed pushing birther-style questions about her citizenship and eligibility to be vice president, which a top Trump campaign adviser retweeted.

Carole Boyce-Davies, a professor of Africana Studies at Cornell University, told Vox that the pressure to choose an identity is something uniquely faced by Black Americans with immigrant families. “This is a good time for Americans to think through this question, and particularly since it’s not raised often in the context of white immigrant identities. [White immigrants] just pass and fade into white identities, and nobody knows what their background is.” The pressure to choose one identity over the other, Boyce-Davies said, is “often put on Black subjects, or subjects of color, where people feel you don’t have full allegiance to one identity when really we are all a complex set of identities.”