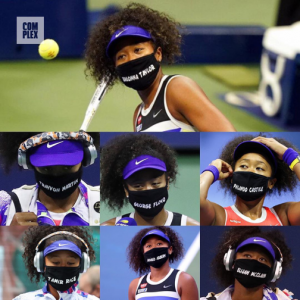 For Famous Friday this week, we are celebrating Naomi Osaka. Last weekend, the 22-year-old tennis star won her second US Open, and third Grand Slam title. Osaka is half Japanese and half Haitian, and in recent years has solidified her status as one of the best tennis players on the planet.

At this year’s US Open, Osaka played in 7 matches. When she arrived for these matches, she wore 7 different masks, which bore the following names:

In interviews during the tournament, Osaka made it clear that her goal was to start conversations. As the deaths of the Black men and women she represented become more distant, many Americans have stopped talking about racial injustice, and pushing for real change. Naomi Osaka wants to make sure that these conversations and movements do not stop, and that the inequality that is apparent in our nation remains at the forefront of our minds.

So on this Famous Friday, let’s celebrate Naomi Osaka’s Victory at this year’s US Open, as well as the statement she made throughout.