Colin in Black and White

Colin in Black and White

Colin, in Black and White 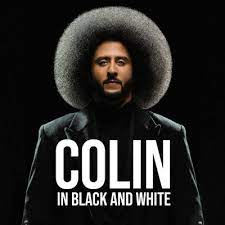 “Colin in Black and White” is a series made in just six episodes. I watched the whole thing and really did enjoy it. It has just enough humor, angst, and sentimental ways about it.

I do have a few caveats about the reflection of Colin Kaepernick. Colin is not an actor, and his appearances are a draw-back, but then again, it’s his film and he can tell it like he wants. His lines are somewhat stilted, and he does not seem to be in his comfort zone. What surprises me most is reviews that call him “Black.” He is multiracial and adopted by a white family in a mostly White town. Suffice it to say he is not in the majority. He is proudly biracial. I’m offended because some viewers and reviewers turn him into Black.

The story tells mainly about his young years and high school days. We just can’t get around his hair. His mother, played by Mary-Louise Parker, tells him he looks like a thug. She also shows her disappointment when he takes a Black girl to Homecoming. For some reason, White mothers of multiracial boys and girls get criticized for the hair and social lives of their children.

I remember writing an opinion piece when my children were little that I was not going to be made to feel guilty about their hair. I was criticized because I can’t make afros, didn’t know what products to use, how hard it is to undo braids, or what to even call them. I took some hard blows from people who thought I should learn how. I don’t know about now, but back then there were no “multiracial hair schools.” You learned what you had to know about hair care from other women in the family or friends. I simply ended any turmoil it may cause and hired people who were prepared to care for my children’s hair. I simply took myself out of the equation and made it their responsibility. When Colin is told he must cut his hair or he could not play high school baseball, he questioned the right of the school, but cut it anyway at the urging of his mother.

Colin Kaepernick is all grown up now. I would have loved for this to go on into his “take a knee” advocacy and how he became untouchable in the National Football League. I admire this man and his stand for all kinds of inequities. I thought Jaden Michael did an outstanding job as the teenage Colin Kaepernick and hope they decide to continue to film his story as he gets older.