Court Blocks Trump Administration From Asking About Citizenship in Census 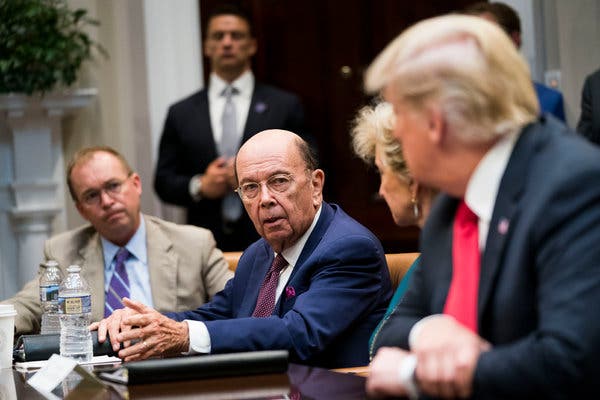 WASHINGTON — A federal judge in New York blocked the Commerce Department on Tuesday from adding a question on American citizenship to the 2020 census, handing a legal victory to critics who accused the Trump administration of trying to turn the census into a tool to advance Republican political fortunes.

The ruling marks the opening round in a legal battle with potentially profound ramifications for federal policy and for politics at all levels, one that seems certain to reach the Supreme Court before the printing of census forms begins this summer.

A broad coalition of advocacy groups and state and local officials had argued that the citizenship question was effectively forced into the census under false pretenses, in violation of laws enacted to ensure that federal policies heed the public interest.

At first blush, the central question of the lawsuit — whether the 2020 census should ask respondents if they are citizens — seems mundane enough. A similar question was asked in most federal censuses before 1960, and it is still asked by the Census Bureau in the American Community Survey, which samples about 2.6 percent of the population each year.

But opponents argued that adding the question to the census itself would undermine the constitutional mandate to count every person, regardless of citizenship, because it would discourage noncitizens from filling out the questionnaire for fear of persecution. That was especially true, they said, in light of the Trump administration’s open hostility toward some immigrant groups and its campaign to round up and deport undocumented residents.

Roughly 24 million noncitizens live in the United States, and fewer than 11 million of them do so illegally. Nearly one in 10 households includes at least one noncitizen. A substantial reduction in the number of households that respond to the census could alter the distribution of hundreds of billions of dollars in federal grants and subsidies.

Because the census is also a statistical baseline for business and government decisions, an undercount could skew countless decisions on matters like where to locate new stores or where to open or close medical clinics.

Total population figures will be used to reapportion seats in the House of Representatives in 2021, so the contours of Congress, the Electoral College and thousands of state and local political districts could be affected. Because noncitizens tend to live in places that disproportionately vote Democratic, undercounting them in the census would be likely to shift federal spending and political power to Republican areas.

Some of the six lawsuits to block the addition of the question, filed by advocacy groups and public officials in California, Maryland and New York, argue that such a shift is the real motive for the Commerce Department’s decision.

The official explanation from Wilbur L. Ross Jr., the commerce secretary, was that he was responding to a request the previous December by the Justice Department, which stated that census data on citizenship would help it better enforce the 1965 Voting Rights Act. The Commerce Department oversees the Census Bureau.

Under court scrutiny, Mr. Ross’s argument turned out to be incomplete. As Mr. Ross later acknowledged in another memorandum, he had begun considering the issue within days of becoming Commerce secretary in February 2017. Internal documents made public in the lawsuit showed that Justice Department officials had not asked for a citizenship question, and had rejected an initial plea from the Commerce Department to do so. Only after a monthslong campaign, capped by a telephone call by Mr. Ross to the attorney general at the time, Jeff Sessions, did the Justice officials assent.

In sworn testimony, the department’s senior civil-rights official conceded that census data was not necessary to enforce the Voting Rights Act, and that citizenship information from the American Community Survey and its predecessor had been used for more than five decades without difficulty.

The Census Bureau itself had recommended against adding a citizenship question, estimating in an analysis in January that at least 630,000 households would refuse to fill out the 2020 questionnaire if such a question were included. Adding a citizenship question “is very costly, harms the quality of the census count, and would use substantially less accurate citizenship status data than are available from administrative sources,” the bureau’s chief scientist, John M. Abowd, wrote in a memo to Mr. Ross.

Government lawyers argued repeatedly during the trial that none of that mattered, because Mr. Ross had broad leeway in making his decision. That statistical experts disagreed with Mr. Ross “is immaterial to this case,” Deputy Assistant Attorney General Brett A. Shumate told the court. “All the secretary is required to do is to provide a reasoned explanation,” he said. “He doesn’t have to choose the best option.”

Lawyers for the plaintiffs said Mr. Ross’s decision was not based on the merits, but was clearly tailored to his personal views. Mr. Shumate disagreed. While “it was evident that he had a policy preference” toward adding a citizenship question, Mr. Shumate argued, Mr. Ross had sought a range of advice and had acted only after the Justice Department established a need.

“Where’s the evidence that Secretary Ross would have plowed ahead had he not had the D.O.J. letter” requesting a citizenship question, he asked. “There is none.”