(CNN)The redrawing of seats in the US House of Representatives will be delayed by several months, officials announced Friday, with states unlikely to receive the detailed population numbers that are typically released in the spring until the end of September.

The Census Bureau announced September 30 as its new target for releasing the numbers used in statehouses nationwide for the once-a-decade task of drawing new congressional districts. This process determines the political power of communities, with long-lasting impacts. 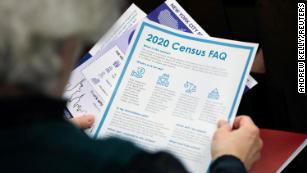 The redistricting numbers are typically released by April 1, and the Census Bureau historically provides the numbers even earlier to many states.
The delay threatens to throw off the redistricting process in many states. The National Conference of State Legislatures says laws in several states require legislators or redistricting officials to complete the redrawing of districts this summer — an impossibility without the data. Other states do not tackle redistricting until later.
Census officials told reporters on a conference call Friday that they are just sharing news of the latest delay with state officials.
The process is already behind schedule, as the data that had been due by the end of 2020 to determine how many seats in Congress each state receives has not been completed and released. Census officials say they anticipate releasing those figures by April 30.
close dialog
Susan Graham2021-02-13T18:44:53+00:00February 13th, 2021|