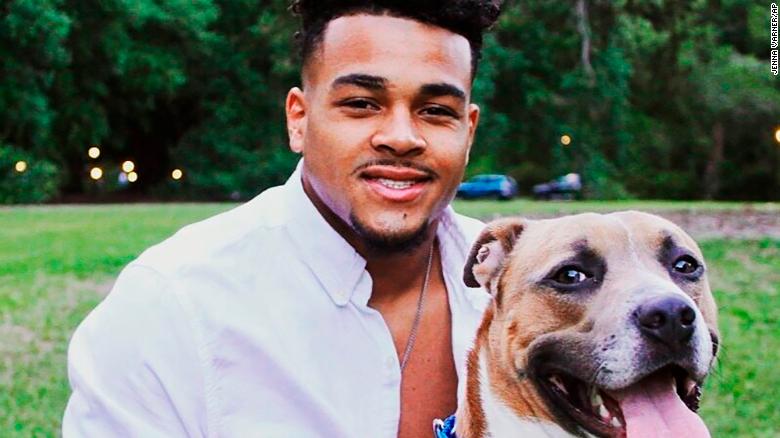 (CNN)The legal team for a biracial man charged with felony murder in the shooting death of a 17-year old in Statesboro, Georgia, last month claims their client was defending himself against an angry group of White people.

Marcus “Marc” Wilson, who is biracial, was in Statesboro visiting his girlfriend, who is White. The two were driving on their way home from Taco Bell around 12:30 a.m. ET on June 14 when they claim they were harassed by a group of White men in a truck yelling racial slurs at them, according to Wilson’s lawyers.
The group in the truck yelled “your lives don’t matter,” called Wilson “N***er,” and his girlfriend a “N***er lover,” attorney Francys Johnson said in a press conference Monday. Johnson says, fearing for their lives, Wilson, 21, “defended his life” using a legally registered firearm when he shot at the group.
What you need to know about ‘stand your ground’ laws
A passenger in the truck, 17-year old Haley Hutcheson, was struck and later died from a gunshot wound.
Hutcheson’s parents spoke at a press conference on June 17th. The family said Hutcheson was in the wrong place at the wrong time, CNN affiliate WSAV reported.
“You took a beautiful child from this sister, that child did not deserve to get what she got,” said Robert Baggett, Hutcheson’s grandfather.
Her son was killed in a ‘stand your ground’ shooting. Read her message to him on what would have been his 25th birthday
During the press conference, another attorney for Wilson explained they planned to defend Wilson using Stand Your Ground and self-defense arguments.
“This should not have been handled the way that it was,” said attorney Mawuli Davis. He argues that if someone in the truck is guilty of crime against his client, resulting in the death of Haley Hutcheson, they should be charged with the death of the passenger.
“Rarely, do we see successful Stand Your Ground/self-defense claims when Black people attempt to assert them,” said Davis. “This is a real test of whether the legal system in Georgia can be just for all citizens.
A bond hearing for Wilson was scheduled for Tuesday in Bulloch County Superior Court. That court date was postponed over Covid-19 concerns. A new date has not yet been scheduled.
multiracial2020-07-09T07:30:37+00:00July 9th, 2020|